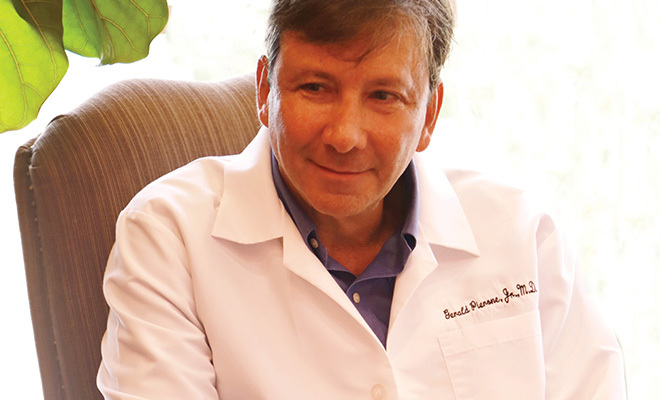 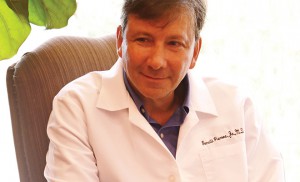 “Our facial appearance in a sense is a social mirror and reflects how other people perceive us. So instead of being treated as an ill person, after treatment with facial fillers, these individuals were again treated more normally,” Dr. Pierone noted.

Dr. Gerald Pierone, Jr., made the decision at an early age to specialize in infectious disease care. A young, idealistic caregiver, he had great ambitions to help improve and change the world through his focus. And he has done just that for so many people who have come to him for what many would call a miracle.

“I got into the HIV field because I was in training at Mount Sinai in New York when the AIDS epidemic was raging out of control in 1986 through 1990,” he explained. “Young, previously healthy gay men were getting sick and dying terribly from a disease that we really had no effective treatment for. There was such an unmet need for medical care for these patients and they were often treated badly because of fear and stigma.”

Ninety-five percent of their patients died within two years of diagnosis, so it was a very intense and difficult field. It also attracted some of the most compassionate and dedicated health care professionals he had ever met, so he was part of a remarkably special team during those four years. “One of the most difficult decisions I ever made was leaving my teaching post and the AIDS clinic at Mount Sinai and Elmhurst Hospital in Queens, which was part of the program,” he expressed.

This intensely caring doctor chose to move to Florida because as a student his path had led him to the University of Florida when his mother suggested he consider becoming a doctor. “I originally went to Carnegie Mellon in Pittsburgh for chemical engineering, but left after one year because my father’s business suffered a sudden financial reversal and I didn’t have enough time to put a financial aid program in place to continue. I also realized that engineering was not a good fit for me, so I was searching for a new life plan. My mother suggested I consider becoming a doctor and that led to an epiphany–I could use my strengths in science to help people through medicine. My aunt was a nurse in Pompano Beach and she invited me down. I got a job as a surgical orderly at Boca Raton Community Hospital. I was 18 years old and this was my first real exposure to hospitals and medicine, and I realized right away that this was right for me.”

Dr. Pierone established Florida residency, applied to University of Florida, and after one year left his orderly job at Boca Raton for Gainesville as a pre-medical student. In Gainesville, they had the Junior Honors Medical Program that offered a faster track to becoming a doctor; it allowed one to skip the last two years of college. Instead, the junior year was dedicated to small group learning and medical research, and the senior year became the first year of medical school. Thus, he completed his undergrad and medical school at University of Florida. He went to Rutgers University for internal medicine for three years, then on to Mount Sinai for that intense one-of-a-kind training that changed his thinking.

“In 1990, I was newly married to a cardiologist, Nancy Cho, and we knew we wanted children at some point. The upper east side of Manhattan is not conducive to raising a family, so we realized we needed to move somewhere else. Florida beckoned and we answered the call,” he confirmed.

And what a stroke of luck that was. He became a magnet for HIV patients in Vero Beach, who came from north and south for his treatment. In 1996, there was a dramatic transformation in treatment of the disease with the advent of triple therapy, and it went from a death sentence to a chronic, long-term, manageable disease. A side effect, however, is an unusual form of mitochondrial toxicity, which causes lipoatrophy, or facial fat wasting. This led him to begin using the facial fillers Sculptra® and Radiesse®, which were approved for HIV patients before the general public, to eliminate the gaunt, hollow cheeks so prevalent among AIDS patients.

“Our facial appearance in a sense is a social mirror and reflects how other people perceive us. So instead of being treated as an ill person, after treatment with facial fillers, these individuals were again treated more normally,” Dr. Pierone noted. After several years of experience treating patients with HIV-related facial wasting, he then began offering facial filler treatments to the general public. Over the past 10 years he has more than 15,000 treatments under his belt. Liquid face lift products include Sculptra, Radiesse, Bellafill® (Artefill®), Voluma® and Juvederm®.

In addition to facial fillers, he has added Ulthera® to his practice in order to improve upon results obtained with fillers alone. This device uses high-intensity ultrasound waves that are directed to the skin; this leads to collagen stimulation and tightens the skin. “We all age differently, and these non-surgical treatments restore and tighten the envelope of the skin, and there is no down time. They have a durability of about four or five years,” he confirmed.

He is actively involved in clinical research with facial fillers and lectures extensively on this subject. He is recognized as a national trainer for Bellafill and is the number one injector of Bellafill in the United States. Dr. Pierone is also the expert physician for the facial wasting forum on TheBody.com, a comprehensive HIV/AIDS resource.

In addition to his private practice in Vero Beach, Florida, Dr. Pierone is the founder and executive director of the Whole Family Health Center, with offices in Vero Beach and Fort Pierce. This nonprofit medical clinic provides primary medical and behavioral health care for homeless and low–income patients. He has published numerous peer–reviewed reports and conducted extensive clinical research in the areas of HIV/AIDS, antivirals, cardiovascular and metabolic complications of therapy. Dr. Pierone has been featured in media such as the Huffington Post, and handles questions related to advanced non-surgical facial rejuvenation.